When you tell friends or family that you go to Hendrix College, the chances are that they comment about “that liberal school,” and they’re not just talking about the fact that Hendrix is a liberal arts college. No matter how that phrase is understood, Hendrix is known for having a very forward-thinking student body. In light of the 2020 election and the prevalence of activism in the Hendrix community, I was curious as to whether or not we, the students of Hendrix College, are truly as liberal as we think we are.

With the help of other members of The Profile staff, I created an anonymous Microsoft Form survey of political views to make the data easier to analyze. The questions in this survey consisted of student information like gender, class year, and major. Then, the students were asked to rate their political views on a scale of 1-5, 1 being very liberal and 5 being very conservative. The rest of the survey consisted of five questions derived from the 2016 ANES (American National Election Studies) survey. These questions were hand-picked from the survey with the belief that the answers could easily be defined as liberal or conservative.

After publicizing the survey via e-mail and Microsoft Teams, we ran the survey for about a week and a half and gathered a total of 155 responses before closing it. Upon first closing the survey, I discovered that the average number of students rated themselves on the political view scale was 1.88, which shows that, for the most part, students believe themselves to be closer to liberal (2) rather than very liberal (1). At a glance, pie charts of the responses to the 5 ANES questions also showed a similar result. The majority of students seemed to choose answers that indicated a liberal way of thinking. However, we wanted to go deeper with this analysis to cover multiple questions about students’ political views and how they relate to other factors.

We assigned each question a certain number of points to create a liberalism score. The items on gay marriage, transgender bathrooms, and abortion were weighted more heavily than those of gun control and the death penalty. The score is on a scale of 0-36 points, 36 indicating someone who is as liberal as possible according to this survey. With this new scale, we created the following graph: 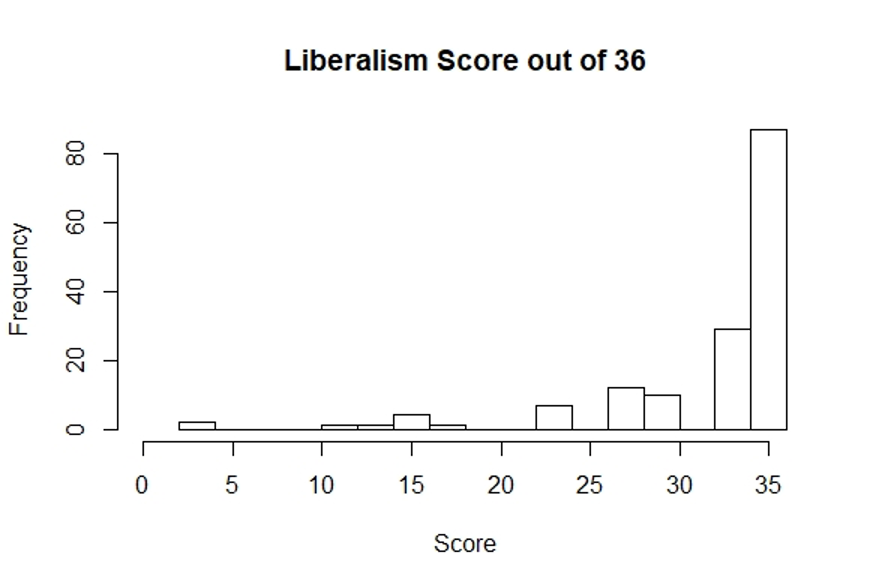 As you might see by the negative skew of this graph, the great majority of Hendrix students who completed the survey had liberal political views. There is a degree of uncertainty about the generalizability of these results, however, given the small sample size. It may also be argued that those who lean liberal might be more likely to complete a survey like this.

However, one phenomenon we observed from the data is interesting to note. Though most of the respondents’ self-reported political views were in line with their liberalism scores, a few respondents’ liberalism scores (or answers to the ANES questions) showed that they are more liberal than they believe themselves to be. This phenomenon is illustrated below, with self-reported scores being on a scale of 36 as well.

Interestingly, the data also shows a correlation between students’ liberalism and majors. Those who are majoring in the “arts” category — which encompassed theater and art majors —  were the least liberal according to this survey, while those majoring in Anthropology/Sociology were the most liberal. We also measured how accurate each reported major was in their self-report of political views. Anthropology/Sociology was the most accurate, actually being slightly more liberal than they reported. Religious Studies/Philosophy majors and those undecided were more conservative than they reported. However, Health Sciences majors were the most inaccurate with their self-reports, showing themselves quite a bit more liberal than they reported. Keep in mind: it should again be noted that the survey pool was small, so any major correlations should be taken with a grain of salt.

So, to answer the burning question of how liberal Hendrix is— we’re pretty liberal. In fact, it appears that some students’ views are more liberal than they think they are, which could be a result of the “liberal influence” of the Hendrix student body. Ultimately, however, it is important to note that having diverse political views on campus is not a bad thing— it can encourage people to be more open-minded, as well as encourage healthy debate. As long as their views are not harmful to others, the next time you come across one of your peers who does not have the same opinions as you, try to hear them out. Whether either of you is convinced by the other’s argument, you might be able to introduce each other to a new way of thinking, at least.