Even though he just announced his plunge into the presidential primaries, former Vice President Joe Biden has been the front-runner in the contest, largely because of his durable support from women. And what’s most surprising about that is his record with women’s rights, and, well, women. I guess it’s easiest to just think of him as an authentic, relatable, caring man who is one-half of the Obama-Biden bromance – because, clearly, he can ride that wave forever – but if voters truly want what’s best for America’s future, they’ll have to dig deeper into his problematic political past.

Biden entered the Senate in 1973 as a 29-year-old practicing Catholic who soon concluded that the Supreme Court went “too far” on abortion rights in the Roe v. Wade case. He told an interviewer the following year that a woman shouldn’t have the “sole right to say what should happen to her body.” In 1981, Biden proposed the Foreign Assistance Act, which barred U.S. aid from being used for any medical research on abortion, and it’s still in effect today. Then, in 1982, he voted for a proposed constitutional amendment that would have effectively overturned Roe v. Wade by giving the states the right to outlaw abortion. And he also voted to ban federal funding for abortions: “Those of us who are opposed to abortion should not be compelled to pay for them.” Biden’s stances about abortion fluctuated throughout his career, and by the time he left the vice president’s mansion in early 2017, he was a 74-year-old who argued that the government doesn’t have “a right to tell other people that women, they can’t control their body.” 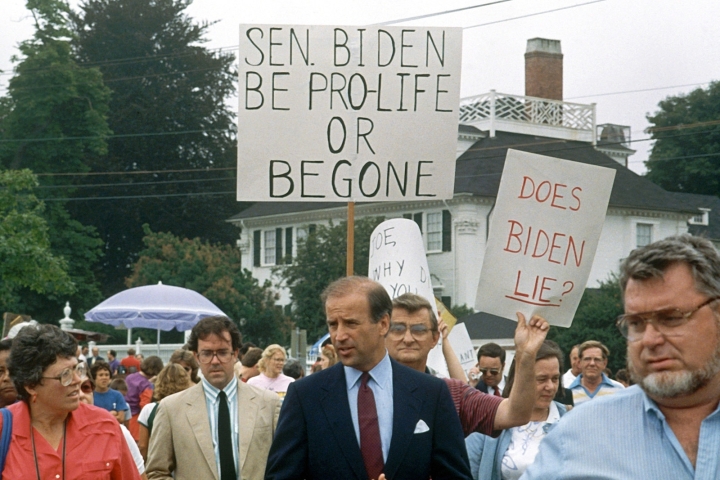 Of course, abortion has been a difficult issue to navigate for most Catholic Democrats and leaders, and I’m glad he eventually decided to let women be in control of their own bodies (with some limitations). But, the problem is, Biden is now trying to rebut those concerns, telling members of the Delaware Democratic Party that he has “the most progressive record” of anyone running for president. Because of the Trump Administration’s, as well as the new conservative majority on the Supreme Court’s, efforts to restrict access to abortion have heightened concerns among many Democrats that federal protections regarding abortion rights could be chipped away or eventually overturned. The next president of the United States needs to be a dependable ally on abortion issues, and Biden appears unreliable. He’s trying to carve out space for himself as the middle, moderate candidate, but he’s really going to have to get with the times and recognize that standing with abortion rights is the middle, moderate position. I don’t think anyone – maybe not even Biden – knows if he can get there or not. A couple of decades later, in 1990, then-Senator Biden co-sponsored the Violence Against Women Act in the U.S. Congress. It was (supposed to be) a landmark piece of legislation that changed the way our country responded to domestic violence and sexual assault. But then, in 1991, he served as chair of the Judiciary Committee during the then-Supreme Court nominee Clarence Thomas’ confirmation hearings. Anita Hill, a lawyer and a professor, had accused Thomas of sexually harassing her at two different jobs, and was aggressively questioned by the committee, but, most intriguing, by Biden.

Earlier this month, Biden called Hill to express his regret over “what she endured” while testifying against Thomas. But she left the conversation feeling deeply unsatisfied and declined to interpret his words as a real apology. Hill wasn’t convinced he truly accepts the harm that he caused her and other women who suffered from sexual harassment and gender-based violence, and we shouldn’t be either. He also made a comment about how he “wished he could’ve done something” to make the hearings fairer for her. Most relatively young voters (including myself) weren’t present (or, alive) for the hearings, but it’s essential to recognize that he was in charge of overseeing everyone’s testimony, and how they were presented to the senators. 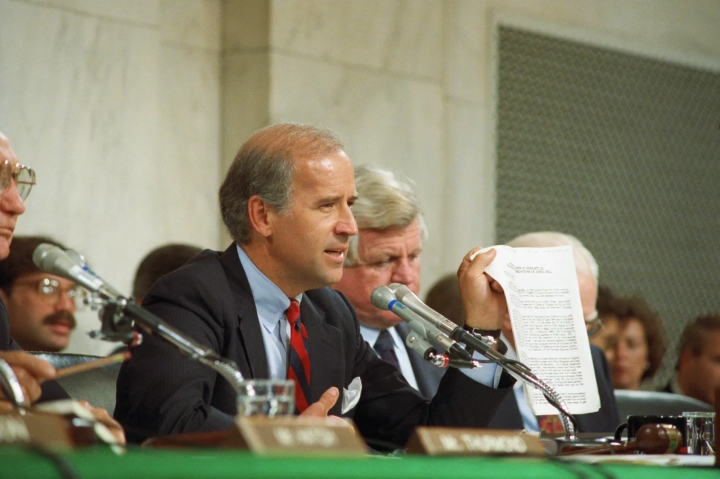 So he absolutely could have done more. He could have done more to shield Hill from the all-white, all-male members’ attacks (like accusing her of “erotomania,” saying her testimony wasn’t reliable, suggesting she made up the allegations based on the book The Exorcist, etc.). He could have structured the hearings more fairly. He could have not allowed Thomas to testify before and after Hill did. He could have called upon three women to testify about their own experiences with Thomas and office culture. But he didn’t. Biden’s remarks sought to tackle his involvement in the hearings directly, but they also contained some notable omissions. By saying he wishes he could’ve done something, and “I’m sorry for what happened to you,” he failed to confront his own culpability on the issue and the power he had at the time. They’re both absolutely different from saying “I failed to give her the hearing she deserved.”

Then, in 2009, as we all know, he officially became the Vice President of the United States. And, in the past few months, women have come forward saying encounters with Biden during his time in the White House have made them feel deeply uncomfortable.

The first allegation came from Lucy Flores, a Democratic lawmaker from Nevada. She wrote an op-ed for The Cut at the end of March, claiming that former Vice President Joe Biden had grabbed her shoulders from behind, sniffed her hair, and kissed the back of her head while she was campaigning for lieutenant governor in 2014: “My brain couldn’t process what was happening. I was embarrassed. I was shocked. I was confused.” Three days later, Amy Lappos – a former congressional aide in Connecticut – told the Hartford Courant that, while volunteering at a fundraiser in 2009, Biden also touched her inappropriately: “It wasn’t sexual, but he did grab me by the head. He put his hand around my neck and pulled me in to rub noses with me. When he was pulling me in, I thought he was going to kiss me on the mouth.” And then, at the beginning of April, the New York Times published the accounts of two young women who alleged that Joe Biden also touched them in an inappropriate manner. The first account was of a former college student:

“Caitlyn Caruso, a… sexual assault survivor, said Mr. Biden rested his hand on her thigh – even as she squirmed in her seat to show her discomfort – and hugged her “just a little bit too long” at an event on sexual assault at the University of Nevada at Las Vegas. She was [nineteen].”

The second was of D.J. Hill, a writer who met Biden in 2012 at a fundraising event in Minneapolis:

“When she and her husband, Robert, stepped up to take their photograph with the vice president, he put his hand on her shoulder and then started dropping it down her back, which made her ‘very uncomfortable.’ Her husband, seeing the movement, put his hand on Mr. Biden’s shoulder and interrupted with a joke. Ms. Hill did not say anything at the time and acknowledged that she does not know what Mr. Biden’s intention was or whether he was aware of her [discomfort].”

And, considering his well-documented history of inappropriate touching, there are most likely hundreds of more stories like this.

In response to these misconduct allegations, Biden released a two-minute video on Twitter, claimed that he would be more “mindful” of other people’s personal space, and how it was his responsibility to meet the shifting of “social norms.” But another one of his responsibilities, he said, was to make human connections on the campaign trail, in politics, and in life: “I shake hands. I hug people. I grab men and women by the shoulders and say, ‘you can do this.’ Whether they’re women, men, young, old, it’s the way I’ve always been. It’s the way I’ve tried to show I care about them and that I’m listening.” 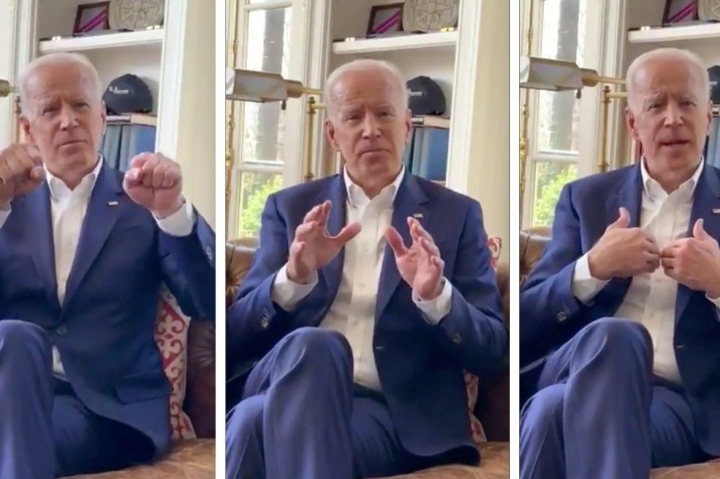 But is he actually listening to these women? I’m glad that he acknowledges that he made women feel uncomfortable, but he needs to be aware of how important it is to take personal responsibility for inappropriate behavior. And not once, in the video or during a speech or wherever else, has he apologized to the women affected by his behavior.
Sometime before the release of his Twitter video, he talked to reporters about his inappropriate touching of women over the years, once again offering a convoluted apology regarding his actions: “I’m sorry I didn’t understand more. I’m not sorry for any of my intentions. I’m not sorry for anything I have ever done.”

And to make matters even worse than that, while speaking at an International Brotherhood of Electrical Workers conference in Washington, Biden used his first public remarks since the complaints emerged to try to push past the weeklong controversy. As he took the stage, he hugged the union’s president and said, “I just want you to know I had permission to hug [him].” And the largely male crowd burst into laughter. And then, several minutes into the speech, Biden spotted children in the audience and welcomed them onto the stage. He wrapped his arm around a young boy: “By the way, he gave me permission to touch him.” The public joking struck a nerve among the women who have expressed discomfort with their interactions. The jokes are a clear indication that Biden doesn’t get it and doesn’t take the voice of women who have come forward seriously.

Obviously, this isn’t Biden’s entire comprehensive involvement in politics, but he, like all of us, has some blind spots. None of us are perfect. But for someone who claims to have the most progressive record, has worked their entire life to empower women, and will continue to be the strongest advocate for women’s rights, we – as voters, as Americans, as women and men – should expect more than half-ass apologies.

One thought on “Sorry, not Sorry: The Problem with Joe Biden”