Passion Play – Part One. A play about a play beginning with an opening number about how it is, in fact, a play. This was my complete knowledge of the show five minutes in. A better background would say that the play within the play is a “passion play” performed by the same cast of villagers every year. This ancient ceremony depicts the dying moments of Christ with the premise being that in Protestant Elizabethan England the Catholic practice of acting out Jesus’ death was newly dangerous. Passion Play is the first of three parts performed by the Hendrix Players, the second of which will be performed next semester, both directed by Tony Horne. 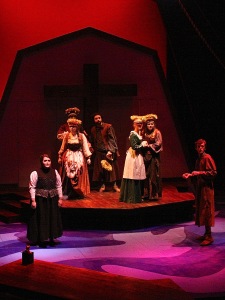 The cast of villagers is shown having grown into its parts, demonstrating what an effect on the actors lives these roles have. Juxtaposed, there are John the Fisherman (Sam Gibson) who plays Jesus and is beloved to the townsfolk, and Pontius the Fish Gutter (Michael Crippen) who plays—as it might be assumed—Pontius Pilate. He was sewn shut wrong after a violent birth and is pitied by all. Another pair is Mary the Virgin (Peyton Barrow) who is boy-crazy, and Mary Magdalene (Ebony Ivory) who is a lesbian, both named Mary. They begin with a messy love-triangle wherein Pontius loves Mary the Virgin who loves John who in turn loves a visiting Catholic friar (Avery Kennedy) running from the law. Of course, Mary Magdalene is also in love with the other Mary. However, the business of preparing for the play gets more complicated after Mary the Virgin becomes pregnant with Pontius’ child and convinces the friar it is an immaculate conception. What ensues is bitter, fishy, and topped off with a deus ex machina ending brought about by the queen of England (Jackson Sims). On the upside, Village Idiot (Marlee Hoggard) could turn the sky red.

Crippen’s portrayal of the Fish Gutter was passionate and momentous, but while his delivery made it clear that he meant what he was saying, that doesn’t mean audience members understood it. His wordy rants directed disdain at many but only in the case of his cousin did it feel justified. At random moments fish popped up inexplicably bowing to him. I would later be told by assistant director Danielle Carney that this was them worshiping him, “We joked about him being the fish king and so there were different parts of the choreography with the fish puppets where they would circle his head and that was a crown. That was our poster as well, a dead fish with a crown of dead fish.”

Carney also told me that the homoerotic vibes between Kennedy and Gibson’s characters was a “definite actor choice.” Gibson delivered a performance similarly engaging to Crippen’s and as delightfully self-involved as could be hoped. Barrow’s portrayal of the Virgin was believable as was Ivory’s portrayal of Magdalene, however, it seemed like a disappointing feature of the script that neither had the opportunity to be as flamboyantly self-righteous as the male leads.

On the more minor characters, Josh McNair’s Machinist made every scene he contributed to more joyful and his expressiveness pulled the play forward. The script seemed to write deeper meaning into the Village Idiot than it seemed easy to interpret as an audience member, despite this, in her portrayal, Hoggard lowered the intensity of scenes that desperately needed it. When she was asked to step up into a starring role in the passion play she brought her chaotic glee to the center of the production. As in Uncle Vanya, Hoggard brings a sorely needed element of joy to the Hendrix Players’ fall drama.

On the whole, what stood out most about Passion Play Part One was how much it felt like the beginning of an unfinished story. However much actors tried to pull in the slack, it was clear the story had more to tell. In the words of the plays own Queen Elizabeth, “The biggest weakness of the play was its lack of development.” The solution to the lack of development would be to finish the rest, so let’s look forward to part two this coming spring! All roles will be recast and scripts are now available to be checked out, auditions will be January 2019.